Posted in Careers In Automotive, interviews

How To Become a Mechanic 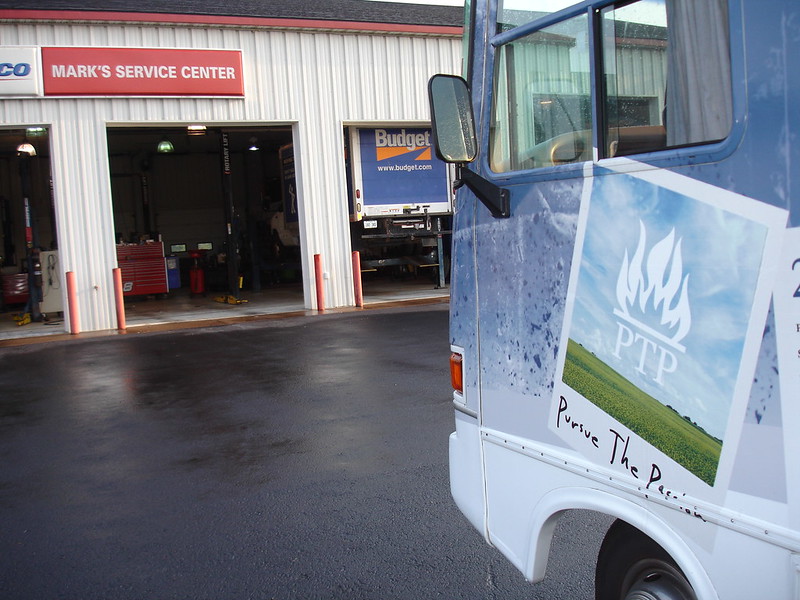 When did you open Mark’s Service Center?

Cool. So what were you doing before this?

I was a line mechanic at a dealership.

Okay. So how long did you do that for?

I was there ten years. And before that was school. College.

So what led you to want to open your own business?

That’s really what gives you the most joy in what you do is providing that service.

Yeah. I talk to my people. I know how to talk to them, I explain stuff to them so they’re not deer in headlights. That’s what it’s about. Community takes care of me, I take care of the community. It goes both ways.

Is that a challenge as a mechanic when people walk in and have preconceived notions or are already jaded?

So you have to explain it to them and calm them down. Mostly, people are pretty good.

So if you came into this industry right after school?

Yeah. I went to Morrisville. I graduated from Morrisville and went right to the dealership to work.

So if you weren’t doing this, what do you think you’d be doing?

I don’t know. I don’t really have a clue. I’ve always liked working on cars. Then I graduated to pushing papers and had a different learning curve.

Who got you into cars?

I blame my parents because they weren’t rich enough to have new cars. So they always had old cars. I always got stuck fixin’ ‘em. So they got me into it.

As you opened your own business, was there ever a point where you looked at your situation and saw that it wasn’t going to work? Where there was a fork in the road and you could either stop or keep going?

You always get stumbling blocks. The question is do you quit? Or do you get up and keep moving? You find out that if you keep moving, nothing touches ya. Keep moving. If you wanna crawl in a corner and say, ‘Poor me,’ then ya know, you’re going to get what you get.

Why do you personally keep going when those stumbling blocks arise?

Well, you seen the size of this place. Sort of too late to quit (laughs). But why don’t I? Number one I have responsibility and I’m not the type of person to walk away from my responsibilities.

Responsibilities to the business, to yourself, to your employees?

Do you think most people go after that American Dream?

I think it’s just different breeds. Different beliefs. You can ask yourself, how come you don’t own a business?

It all depends. It depends on…you need support. Big time. Building the business…my wife was my best support. She helped me as much as she can anyway she can. She supported me left and right. Same with my family and friends. Do you have support? You’ve got everything.

Do you think most people are happy with what they do for a living?

Define most people (laughs). I mean, I don’t know if they’re happy, if they’re content, it’s hard to say. It all depends on why people do stuff. I mean, everyone’s gotta have a job to survive. You can’t survive without a job. Well, you can, but never mind.

So did you like what you were doing when you were a line mechanic?

Yeah. I enjoyed it. Where there days when you were blind sided and miserable? Yeah. But, it’s just like everyone else. You can’t make it go away.

If you could go back to when you were just graduating Morrisville, and just tell yourself one piece of advice, what would you tell your 22 year old self?

I might have caught myself and told myself about some of the stumbling blocks I ran into. But, then again, I wouldn’t tell me all of it because you have to learn it in order to experience it. And then educate yourself about it so you don’t do it again.

You can’t fix all the bad stuff, because at that point, you’re going to just create more bad problems. You already fixed em (laughs).

Maybe you could just touch on the community here. We were talking over lunch and talking about factory workers. Saying that a lot of these people do the same thing over and over. Some factories have extremely happy workers, some don’t. I brought up the point that it’s the community feel that really feeds into that personal happiness.

You gotta treat people as human beings. Not slave drivers. Not a whipping post. Do I have arguments or disagreements with the guys? Yeah, sorta, kinda. But not really. They know what they need to do. There’s no reason to get out a whip and start whippin’ ‘em.

We do lunch here because I think it’s a nice touch. Everybody throws in $12 bucks. What you had today is what you’d have four days out of the week. It’s pretty good. I got a guy here that cooks it. He’s off today so I got stuck cooking. Which I don’t mind. But it’s stuff like that. You gotta treat your people with respect. They take care of me, I take care of them.

The community around here does the same thing. I have the flag flying outside because I gotta lot of customers that were in the military. And I think you need to show your colors. Delco and American Car Care are both red white and blue. That’s how I feel.

So last question, when are we getting out of here?

They’re scrambling to get your pully. Hopefully it’s the right one. You’re the one with the oddball vehicle (laughs). Keep that camera on because then you’ll find out what an irate customer does when we don’t have a part (laughs). No. Hopefully soon. They’re trying to get the pully fixed for ya.